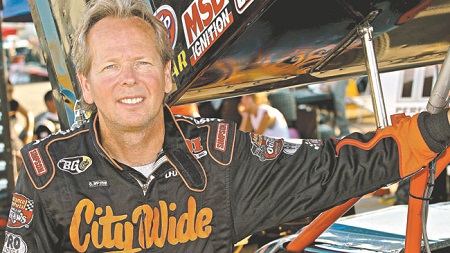 IF there was such a thing as a “fear gland” in the human body, Jac Haudenschild was born without one.

The now 55-year-old American Sprintcar racing legend, who began his dirt-racing career in 1974 as a fresh-faced teenager, still gives his fans and his car owners the unnerving feeling that anything could happen.

The term “white knuckle” and Haudenschild go hand in hand.
Standing at only 5’5” the man known universally as “the Wild Child” returns to Australia after a 20-year absence to race in Valvoline Raceway’s International Season having amassed over 300 career main event wins.

So has he matured as a driver in his 40 years racing?
“We don’t turn over (crash) anywhere as much as we used to,” Haudenschild smiles.

“But that doesn’t mean I won’t go for the win every time we’re on track. It’s how I make my living. It’s what I do. I’ve never done anything else. You can’t think about what might happen, you have to just make it happen.”

Haudenschild, born and bred in a slice of Midwestern Americana called Wooster, Ohio, is one of three Americans who will race for the entire international three-week period as he’s joined by Californian youngsters Tim Kaeding and Brad Sweet.

Both Kaeding and Sweet are imposing characters, carving out stellar full-time careers on the lucrative American scene and racing in Australia during our summer.

When the international phase of the season winds up in mid-January it’s expected the Americans on hand to race will have swelled to over a dozen.

“Sprintcar racing is a brutal sport,” Haudenschild said. “It can pay you handsomely sometimes and sometimes it can really punish you.”

In the early 1990s Haudenschild won the richest Sprintcar race in history at the time at Eldora Speedway in Ohio that paid $200,000.
Sprintcar racing is his life. It’s all he’s ever known.

Not surprisingly, his son Sheldon also races and follows in Dad’s tyre tracks. Sheldon will travel to Australia but race in events in Western Australia.

So does anything scare the seemingly fearless Jac Haudenschild?
Believe it or not, flying.

“I probably would’ve raced more in Australia if the flying stuff didn’t bother me so much,’’ he said.

With over 50 of Australia’s best drivers waiting for their chance to beat him on their home turf it’s par for the course for the diminutive American legend.

“That’s okay,” he said. “We’re kinda used to that. They roll out the welcome mat at the airport, and then they take it away at the racetrack.”