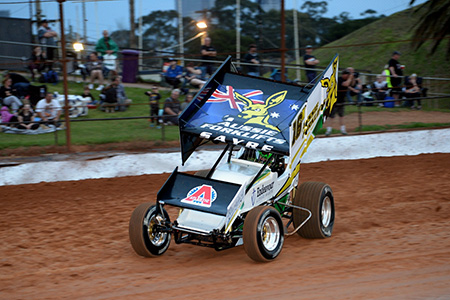 Daniel Sayre, Matt Jackson and Nathan Disney all kicked off their 2019/2020 season in style with main event success in the Sprintcar, Speedcar and Late Model main events respectively tonight at Valvoline Raceway.

For Sayre it was his first Sprintcar main event win in his four years of Sprintcars to date and it came, appropriately, on the night that his sponsor and employers Aussie Forklift Repairs sponsored the Lord Mayor’s Cup season opener.

Sayre started from the eighth row of the 30-lap main event In the AFR / Endeavour Liquid Waste Maxim and quickly began passing cars.

“I felt really good right from the green light,” he admitted later, “the car was fast all night. We were fast in hot laps; we went forward in the heat race and I was a bit surprised how quickly we passed cars early in the A-Main. Usually when you’re that fast that early you worry that you won’t be quick at the end, but the car was fast right until the end.”

Sayre took the #16 car to the lead inside the last ten laps of the 30-lap feature and never looked back.

“It was a huge relief to be honest. I’ve been down that road before where I’ve led the race until the last lap so I just wanted to get it done. I’m thrilled for all our team and family, it’s really cool to get the win on Aussie Forklifts night.”

“Two laps in we started to lose power,” Jackson admitted, “I was really worried we wouldn’t get to the finish to be honest. We had two really good laps at the start but then the battery started to lose charge and we pretty well battled home.”

“When we practiced last weekend I knew we had a fast car,” Disney admitted after the victory tonight, “and that speed continued on tonight. Rocket Chassis have helped us a lot with this car this season and we’re really starting to get a handle on it. We didn’t get a win at Parramatta last season to it’s nice to get one tonight and start the season off on a high.”