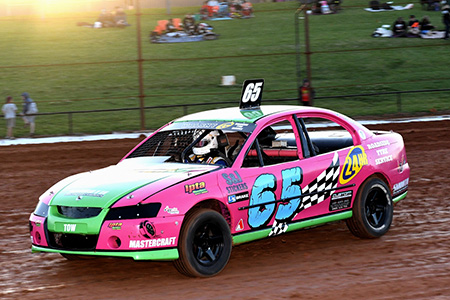 Stevie Walsh was too tough to tame taking out the Street Stockers A-Main from a strong drive from Matt Alexander in second place and Ray Tyler rounding out the three.

“I just want to welcome Matty Alexander on to the podium and congratulate him on finishing second, it’s good to see some new faces up here. Special thanks to my crew and my wife and my daughter in the pits for all their help,” smiled feature winner Walsh.

Former Australian champion Chris Davis was too quick for his rivals in the Lightning Sprint feature race despite the best effort of current Australian champion AJ McTaggart who all but ran him down on the final lap with Jordan Binskin following the duo home in third.

“It’s great to get the season off to a good start,” Davis admitted, “I knew that AJ had to be back there somewhere so I just kept my head down and got the job done. I want to thank my wife Mel for all her support, we drove here from Dubbo today so it’s been a long trip for her, this makes it worthwhile.”

The 20-lap A-Main for AMCA Nationals saw pacesetters Shane Cartwright and Tony Blanch on the front row with Raymond Kime and Shaun Davoodi battling from the second row and having a real crack to break into the lead duo.

Cartwright and Blanch appeared to be set for a 1-2 before Davoodi spun in third bringing out the cautions. On the restart Blanch spun on his own in turn one and two and with fifteen laps to go he had to go to the tail.

Cartwright was silky smooth in lapped traffic and it seemed unlikely that he’d be caught.
A flat left rear tyre on Terry Pankhurst took him out of feature race contention with Raymond Kime running second, Shannon Singleton third and Darrell Kime fourth.

Kime unfortunately went to the pits with four remaining which allowed Spano Gutierrez up to fourth on the restart before moving past Shannon Singleton for the final spot on the podium on the last corner of the race.

“It was an awesome track tonight,” smiled Cartwright, “I’d just like to thank all our sponsors and my wife Gina in particular. Huge thanks to Rob, without him we couldn’t do this and this trophy’s really for him. It’s a great start to the season.”

Ashleigh Jack and Mick Sammut started on front row for the 25-lap Wingless Sprint A-Main and the accounts manager at Aussie Forklift Repairs had her best shot yet at a main event success.

The front row start for Michael Sammut was also one of his best starts to a season.

Jason Bates lucky not to roll with a big bicycle on the opening lap and arch-rival Dean Thomas pulled the same stunt in the same spot just one lap later.

Bates became the leader six laps in with Jack second and Sammut third before the fast moving Jarrad Rust moved into third with a good pass on Sammut.

John McCrae brought on the cautions spinning in turn one and two with eleven laps to go and as Jack developed a smoking motor, Dean Thomas moved into the top three and began chasing down the lead duo.

Rust suddenly had trouble mechanically and began slowing while Bates was smoothly running the top out front until Ashleigh Jack began to make ground back quickly getting back on the tail of Bates before she unfortunately jumped the cushion dropping from second to fifth.

Thomas challenged for the lead with five laps remaining and with three laps to go we had a new leader where he hung on to win from Jason Bates hot in pursuit in second place and Troy Little doing a great job for his first run in the Wingless placing third.

“This car has sat dormant for five years and a guy rang me up and said let’s blow the cobwebs off it and go racing, and we did. It’s not the prettiest car out there but it gets the job done. This was a lot of fun,” said Little.

The win for Thomas with Bates second sets up another great season ahead between the pair who traditionally battle it out across various events and tracks in NSW.

“At the moment we’re just weighing up how much of the season we’re going to do,” admitted Thomas after the race, “I guess we’ve started off pretty well so if we can keep that momentum for the first few weeks we might do the whole season. I can’t thank Arthur Johnson Engineering enough they built us a fantastic motor. I’d also like to thank Flair Dancewear and AGM Electrical. I’m pleased for them all that we got the win.”