BATES GETS REVENGE, RANDELL GETS RIPPING 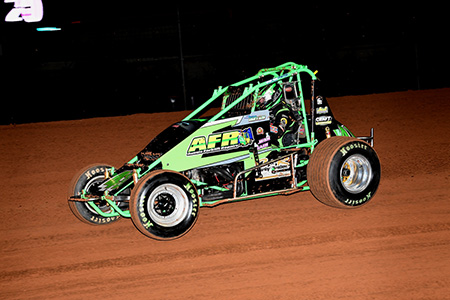 Jason Bates turned the tables on arch-rival Dean Thomas (who beat him the week before) by winning the Wingless Sprint A-Main but as usual it was hectic in the journey to the chequers.

The race lasted one corner as front row duo Paul Freeman and Marshall Blyton made contact with Blyton flipping after he rode the right rear wheel of the #6.

Kyle Mock was a hapless victim in the situation flipping his car behind the crash but was able to remarkably restart at the tail.

The incident elevated the wo brothers Jeff and Dean Thomas from the second row to share the front row at the greens.

Jeff Thomas led initially before Bates split them and moved into the lead with eighteen laps to go before Ionn bounced his way over the cushion in turn two and brought on the caution by spinning.

Mitchell O’Brien too was super quick and moved into fourth place at the restart whilst Pacchiarotta was quickly into the top six.

Shane Sheedy brought on the caution with twelve laps remaining in the 25-lap affair.

Bates led away at the restart and bolted, literally.

Jeff Thomas held sway over last start winner brother Dean in third whilst Mitchell O’Brien was doing his level best to bust into the brotherly battle and steal the final podium spot.

Kyle Mock got back to an amazing ninth position from the rear of the field after rolling over on lap one.

Joel Rhind was scintillating to watch but faded overall when he jumped the cushion and lost many spots off the racing groove.

Dicker stormed to an eventual fifth over Ashleigh Jack strong again this week in sixth.

“Those Thomas brothers are fast, they did a great job but it’s nice to get a win over them after Dean beat us last week. I need to work on this car, take my wife out for dinner during the week, and get this car ready to win again hopefully,” smiled Bates in Victory Lane.

Dalton Rowell was the early leader in the Legend Car A-Main, but the speedy Nathan Moreau was quick to relieve him of the point position before John Egan too staked a claim for the number one spot in a frantic three opening laps.

On lap five it was Egan the leader but only briefly as the cautions came on when Bolton half spun and took out Keanu De Palma in turn one and two.

Bolton was able to restart.

Egan was able to assume control of the race but a battle royal broke out between team-mates Moreau and Liam Camilleri whilst Leayr and Rawlings enthusiastically joined in the scrap.

Camilleri moved into second and set off after Egan but crashed into a lapped car in turn one on lap twelve and lost critical ground.

Fortunately for Camilleri the yellow lights came on when Matt Gordon stopped on the main straight but there was speculation if Camilleri’s #19 would have damage to the left rear after the contact.

Eight laps to go on the restart saw Egan lead away again with Camilleri, Rawlings, Leayr and Rowell rounding out the five in front of a freight train of cars.

Rawlings and Leayr went at it for third with four laps to go, Leayr getting the nod for third as Egan drove away in the #47 and was never headed.

John Egan was the winner recording his first ever victory ahead of Camilleri in second, Allen Leayr third, Rob Rawlings fourth and Dalton Rowell fifth.

After the Checkered flags Dave Browne rolled over when Braydan Willmington made contact with him after skidding across the slick line on the pole and turning the hapless Browne upside down.

“This means a lot to me, my Dad raced for years and it’s great to get a feature win and keep our name up there. I want to send a big shout out to my fianc� who is at home with my sick daughter tonight, so thank you both to them, all my family and all my sponsors,” Egan grinned.

Tim Randell was stoked to secure the victory in the 20-lap Formula 500 A-Main but he may not have done so had early dominant leader Paul Gray not come to mechanical grief just outside of half race distance.

Gray had the field covered but headed straight to the pits without fanfare with a mystery ailment allowing Randell to assume the point position on the restart with eleven laps remaining.

Nathan Pryor was also lurking with intent around the third position for the early part of the race before he too succumbed to mechanical failure in the #9.

Unfortunately the rapidly gaining NSW Champion Lachlan Caunt came off second best when he and leader Randell went for the same piece of clay down low in turn one at the greens and the NSW #1 crashed into the berm and spun to a stop.

With Caunt out at the restart Randell steamed away to win as he pleased from Scott Connole in second place and Hunter Valley ageless veteran Roy Urpeth home in third.

Parker Johnson was fast all night to finish fourth ahead of Tamworth’s Luca Cox in fifth, Hayden Pascoe sixth, ‘stormin’ Kenny Norman in seventh and Erinn Lambert the final placed car in eighth.

“I struggled a bit early, we probably got a bit lucky when Paul went off but it’s the first ever feature win for me so I’m pretty stoked,” said winner Randell in victory lane.

Not only does Blake Matthews have one of the coolest looking cars in the pits – he also has one of the quickest.

The speedy youngster smoked the field all night and began the main event on pole where he sailed off into the distance to record an historic F500 Junior A-Main victory.

Matthews had the field well and truly covered to take the chequers from Lochie Hosie in second place and Max Bevan rounding out third.

“This feels great. I really want to thank my Mum and Dad for all their help. Dad set the car up perfectly for me tonight. I’d like to thank Penrite Oils, my team and Valvoline Raceway for letting the Junior Formula 500’s race here,” smiled Matthews.

The jubilant and colourful Chris “Chaff” Chaffey took the Fender Bender main event win and stood up on the bonnet for a big wave of the checkers much to the delight of infield presenter Mikaela Darcy.

“I’ve waited so long to do this,” he grinned, “the car’s going better now since the old man sent it. I love it.”