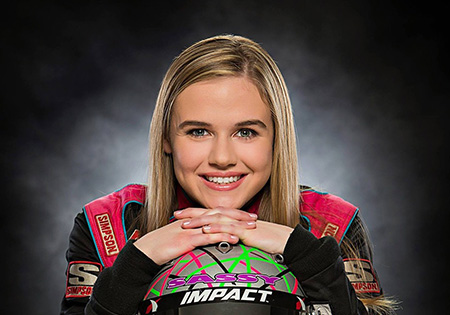 Two of Knoxville Raceway and American Sprintcar racing’s fresh new talents have expressed their keen interest in racing in Australia this summer.

McKenna Haase and Sawyer Phillips have been independently looking into options since the 2019 Knoxville Nationals about the possibility of 410ci and 360ci opportunities in Australia and both are eager to make something happen.

McKenna and Sawyer are both exciting talents with a burning desire to further their careers.

The opportunity to include Australia in their respective resumes is large on their list of priorities.

“Everyone in American Sprintcar racing knows that the racing down in Australia is tough. You only have to look at guys like the Madsens, McFadden, Tatnell, Bogucki and many others who run here to see how good it must be down there. It’s a great way for people like me to keep my eye in over our winter, make some new friends and share ideas with new car owners,” says Phillips.

The 21-year old from Pleasantville Iowa with a name that sounds like he could be a country music recording artist comes from a proud racing and farming family.

Polite, honest and well-spoken the hard charging youngster has already racked up an impressive race and results list since starting in 305’s at Knoxville at the tender age of 15.

Phillips is well versed in both 410ci and 360ci competition at his home track since then – the world-famous Knoxville Raceway.

He’s handy in either 360ci or 410ci competition and is always looking to increase his program and his experience.

A publicity machine the 22-year-old fan favorite lady from Des Moines in Iowa is renowned for her marketing prowess off the track as well as her race ability on it with her recent appearance on the American Ninja Warrior TV spectacular and her magnetic like attraction from younger fans and aspiring young racers.

The first woman to win a Sprintcar main event at Knoxville “Sassy” Haase has followed a similar transition to Phillips moving from a successful career in 305 racing into 360ci competition where she has already enjoyed considerable success.

Due to her marketability and drive McKenna has already been offered and taken up numerous drives in other genres and race surfaces and is keen to add Australia to the resume.

“I know that an opportunity down under will do a lot for my own racing program, and I’d like to think that I can add a lot to anyone I drove for in return,” she says, “my experience is in 360ci cars until now but I’d grab either a 360 or 410 drive with both hands if it were available.”

Both Phillips and Haase would add significant value to any team willing to take them on during the 2019/2020 season in either NSW, QLD, SA, WA, VIC or TAS.

360ci or 410ci Car owners or sponsors that may be interested in securing the talents of Sawyer Phillips and or McKenna Haase forthwith can contact Wade Aunger through wadeaunger@gmail.com or through this Facebook post.