THE VOICE OF THE OUTLAWS JOINS VR TEAM FOR SYDNEY SPEEDWEEK 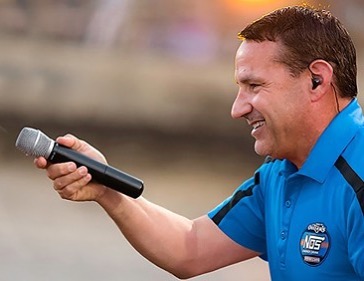 His voice is as recognisable as the sound of the Sprintcar engines he announces.

Since he began as the announcer of the famed World of Outlaws Sprintcars Series back in 1997 he has not missed one, solitary night on the mike.

As of right now, at the conclusion of the Williams Grove "National Open" less than an hour ago Johnny Gibson has announced 1978 consecutive nights of Outlaws competition.

That's not a date.
It's one thousand, nine hundred and seventy eight nights - CONSECUTIVELY.

Having attended over 370 Speedways he's announced at almost 300 of them all over the world and this summer he's headed down under to join the announcing team at Valvoline Raceway.

From December 26 until January 18 Gibson will switch on the mike at Valvoline Raceway for one of the most lucrative periods on record at the iconic Parramatta venue.

The announcement of Gibson coming to Sydney times in perfectly with the news that Speedway live-streaming giant DirtVision will exclusively provide the American platform for all USC Sprintcar events at Valvoline Raceway, Murray Machining & Sheds Speedway and Hi-Tec Oils Toowoomba Speedway.

"I'm really excited to be coming back to Sydney," Gibson said tonight over the phone from the Williams Grove announcers booth in Pennsylvania, "I make no bones about saying that Parramatta has been like a home track for me over the years. I first announced there in 2000 as a guest and I've been to Australia like sixteen to seventeen times since then. I love the racing at Valvoline Raceway and I'm excited about the schedule they have for Speedweek and the Ultimate Speedway Nationals. With Brad, Aaron and Carson taking on the Aussies it's like a home away from home for me during the American winter. I can't wait."

Since starting as a humble program (magazine) seller for the World of Outlaws Sprintcar Series in 1995 Gibson began calling races in 1997 with no formal training and has never stopped.

A diehard sporting fan (particularly his beloved ice hockey team the Pittsburgh Penguins) Gibson shares his passions between Sprintcars, hockey and music - he plays a pretty mean guitar and once was an active live musician with several rock bands back in the day.

His battle-cry "you wanted the best you got 'em four abreast" before each World of Outlaw A-Main has become iconic.

Valvoline Raceway is proud and excited to welcome 'the voice of the Outlaws' Johnny Gibson to our team starting December 26.