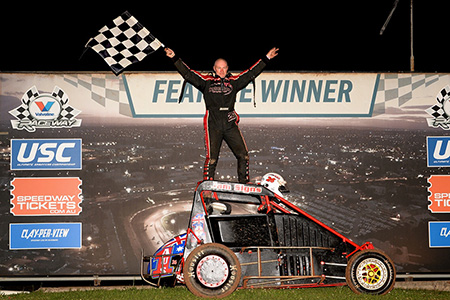 Heaton, the Australian Compact Speedcar Champion, annexed the prestigious and inaugural running of the Alan Streader 34’ event with the great man himself in attendance, held over 17 laps.

It wasn’t always going to be that way however with Shaun Robinson looking the goods for much of the race before Heaton pounced with only a couple of laps remaining.

Robinson repassed Heaton who in turn repaid the favour and snagged back the lead on the final lap to score a thrilling and nail-biting victory that was fitting for the man himself Alan Streader watching on.

Steven Kurtz was a jubilant maiden main event winner in the 20-lap Street Stocker side of things after moving past early leader Stevie Walsh and jetting away largely untroubled for the remainder.


“This is the first time up here getting a win, I’m just stoked. I’ve come close a couple of times but now I can finally say I’ve done it. When I got past Steve (Walsh) I just concentrated on clicking off the laps and hitting my marks.”

Whilst Kurtz was out in front consolidating his lead with a faultless speedy drive the current Australian Champion was making headlines of her own.

Hunter Valley mother of two Kiona Sunerton took the rear of the grid challenge before the race and started from 21st to finish an incredible second place.

Sunerton used the Highway Ford #1 Falcon to blaze around the highline where nobody else was prepared to tread to peel off positions one by one in an amazing drive from the back of the bus.

“That honestly feels like a win,” laughed the excited Sunerton, “that was crazy. When we had the restart and I was tenth I knew it’d be harder because the cars are faster but I just went for the line that nobody else was on and it paid off. For the rear of the grid challenge if you qualify on pole but go to the rear you get $10 for every car you pass, the challenge was the thrill actually not so much the money, that was fantastic. I wish we had a couple more laps because who knows what might have happened.”


Kurtz took his maiden win from Sunerton in second and Walsh third.

Kyle Mock became the third different winner in as many nights when he took the win in the 25-lap Wingless Sprint A-Main from Luke Sayre (who started on the front row) finishing in second place and Dubbo veteran Mark Blyton finally getting himself on the podium by coming home third and getting interviewed by daughter Mikaela Darcy for the first time this season.

Mock was fast all night, moving past good buddy Luke Sayre and in to the number one spot where he was rarely challenged.

The race was typically Wingless frantic on a very fast track.

Dylan Williams brought on the red lights with a big rollover down the back straight on the opening night but fortunately emerged from the wreck unhurt although the same could not be said about his car.

Behind the lead trio of Mock, Sayre and Ashleigh Jack for much of the race a ripping battle ensued between Nathan Dicker, Dean Thomas, Mark Blyton and Mick Sammut to name a few.

Unfortunately whilst challenging Ashleigh Jack for third Nathan Dicker biked up in turn two and lost several spots. As he fought to regain position in turn three and four with five laps to run he and Dean Thomas made contact with Joel Rhind being the innocent party hooking into Thomas’ rear crash bar and spinning to a stop.

Thomas was judged to be the cause of the stoppage and placed at the rear for the restart whilst Blyton squeezed by Ashleigh Jack into third not long after as she tried to make a move on Luke Sayre coming out of turn two.

Mock rocked the win in the end from Luke Sayre in second and Mark Blyton third.

“We had a really good car tonight. It’s good to finally put some good heat races together and start up closer to the front with the faster guys, it really makes it easier to run around the front when you don’t have to pass as many cars. I want to send a shout-out to my Nan who’s not too well at the moment and I’m really glad to get back into victory lane.”

Jordan Binskin got the 2019/2020 season off to a good start winning the second main event of the season to take the honours from last start feature winner Chris Davis in second place and Daniel Kleinig scoring a career-best third place to round out the podium.

Binskin became the second winner in as many rounds for the Lightning Sprints whilst Australian Champion AJ McTaggart unfortunately registered a DNF off the back of his runner-up position the last time they raced.

In the Junior Sedan main event Jack Murphy survived a spirited attack from both Jaiden Healey and Harrison Granger who really turned up the heat in the last three laps in particular to provide one of the best finishes in any class this season.

A small but typically determined field set off on a very fast track due to the amount of rain that fell during the week and even several times today.

The race was interrupted however when Chelsea Essai with was involved in a spectacular crash and rolled over in turn three and four with just five laps to go. The plucky Canberra youngster fortunately emerged unhurt in the crash.

Murphy held on by the barest of margins to take the win.

The next event at Valvoline Raceway is Saturday, October 19 and will be the Hi-Tec Oils Ultimate Speedway Challenge featuring USC Sprintcars for the first time this season, Speedcars and Late Models plus Fireworks.