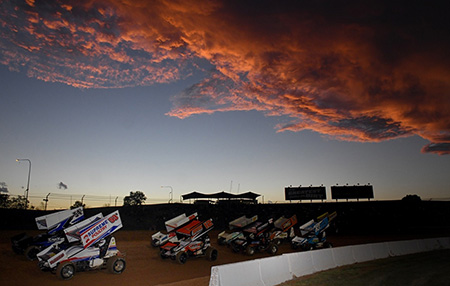 Several drivers are chasing redemption, one is chasing a repeat victory and a whole fleet of V8 Dirt Modified stars are hoping for their first victory of the season this Saturday night at Valvoline Raceway.
The "Old School" Sprintcars format sees the two heats, fastest to the rear of the A-Main system with no qualifying with a number of the USC stars using the hit-out as a fantastic precursor to November 2's Sid Hopping Shootout.

One in particular wants redemption badly.

After starting on the front row of the A-Main in last Saturday night's USC NSW Round One affair Jessie Attard had good reason to think he had the speed and the opportunity for his career first Parramatta victory.

He was looking like a big chance too running with equal speed and aggression to that of regular front runners Sam Walsh and Jamie Veal but a mistake in turn three and four cost the youngster dearly and he spun into the wall.

"I shouldn't have made that mistake, that's all there is to it," says Attard, "I've done enough laps now here in Australia and America not to make a mistake like that. I need to make up for that this time."

McNamara celebrated a career best podium finish at Archerfield Speedway last weekend and will come to Parramatta on a high with his sharp looking KRE Engines #88.

Ben Nicastri returns to the action after missing last weekend with family commitments and he'll add serious spice to the line-up.

Todd Bayley missed last season due to engine and budget issues but returned to the front row of the A-Main last weekend only to DNF with damage after running at the front for almost the entire race.

Robbie Farr's double duties in Late Models and Sprintcars last weekend had contrast with a podium in the Sprintcar but race damage in the Late Model that put several large scars on his car and a severe frown on his brow.

The iconic Speedway jack of all trades was clearly unhappy with some of the on-track incidents and is seriously fired up about this Saturday night's Late Model return.

"The Newcastle Nightmare" Nathan Disney had a night that befitting his nickname but the larrikin lead foot from the Hunter will be back with a vengeance this Saturday night.

With their Australian Championship scheduled in February 2020 the V8 Dirt Modified stars and cars are using every opportunity to get laps in ahead of the title.

This Saturday night's field boasts former Australian Champion Scott Cannon who is without doubt one of the Hunter Valley's most gifted Speedway drivers and a man who fits his last name to a tee.

Victorian second generation racer Todd Hobson joins the predominantly NSW based line-up of the grunty V8 Dirt Modifieds and each driver in the field is looking for their first main event win of the season at "VR".

The kids-favorite Fender Benders will unleash their own unique style of motorised paint-ball with legendary Bender veteran Peter Chaffey looking to go back to back after his most recent win earlier this season.

This Saturday night is the first event held at Valvoline Raceway since the shock news on Monday that the 42 year old Parramatta icon will be forced to close and relocate in 2021 as part of a Sydney Metro train line expansion.

Speedway fans came together at the venue on Tuesday night to rally and to better understand the future ahead for the world famous and adored "Speedway by the Freeway."

Valvoline Raceway principals Barry and Felicity Waldron are not giving up without a fight despite assurances from the NSW Government on Tuesday that a new Speedway will be built to replace Parramatta.
Action starts on track from 5pm this Saturday night.