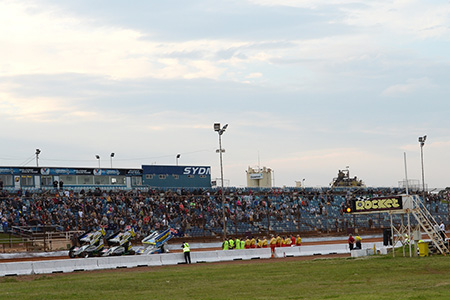 A meeting between the principals of Valvoline Raceway, Speedway Australia and the NSW Government was held this morning in Sydney.

Felicity Waldron and Speedway Australia’s Tim Saville met with several members of Parliament and representatives of Sydney Metro to discuss the future of the iconic Valvoline Raceway after news broke on Monday that a rail project would force the closure of the 42-year-old icon at its Wentworth Street location.

“It’s been a harrowing week naturally,” says Valvoline Raceway’s Felicity Waldron, “Barry and I have been on an emotional rollercoaster that started on Monday when we were told unexpectedly that our land would be acquired for the Sydney Metro project. Understandably there was an immediate outcry from our Speedway community and concern about our rights currently and what we would do going forward.”

Barry Waldron is understandably protective of the venue he has invested millions into since 2014.

“This has been a huge shock,” says Waldron, “we are still a long way from fully understanding what will happen, but the Government promised that the sport will be protected, and the legacy of Valvoline Raceway will be honoured. Ideally, we’d like to remain right where we are of course, the track has been in the same location for forty-two consecutive years, but the reality is this rail project is a lot bigger than our Speedway. We need to ensure that the sport remains a vital part of Sydney and that a new venue is created without interruption from the annual season to season changeover.”

Stakeholders at the meeting today were the Minister for Transport, Andrew Constance and Dr. Geoff Lees, Acting Minister for Sport and representatives from the Sydney Metro project, Speedway Australia and Felicity Waldron.

The news to come out of the meeting include that:

• The Minister has given the commitment that appropriate facilities would be found to relocate Sydney Speedway to allow it to operate autonomously as it has been at its current place.

• That consultation would occur with Speedway Australia and Barry and Felicity in the build process to ensure it was fit for purpose for our competitors.

• That we would transition from one race season to the new one so that the supply chain would not be impacted with the relocation.

Felicity Waldron said that whilst the news from the Government was encouraging it was still early days in the negotiations and a large number of items still need to be resolved.

“We have a bit more direction than when we started the week certainly,” she said, “but obviously today was a preliminary discussion and there are still many things we need to ensure before we go much further. Certainly the Government has committed to a new facility and that’s an encouraging start, but we remain committed ourselves to Valvoline Raceway’s current location until we are 100% sure of what is on the table and actually happening.”

Speedway fans are encouraged to sign the online petition and also the hard copy at the track this Saturday night and onwards so that the impetus of support for Valvoline Raceway is fostered and continued throughout this process.