BRAZIER GETS HIS CAREER FIRST! 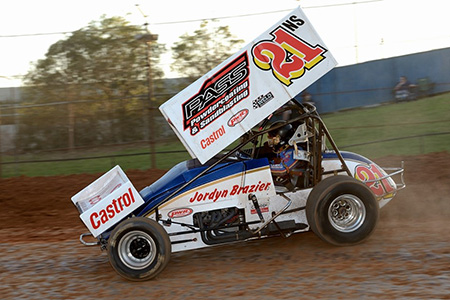 It's been a measured, deliberate and planned strategy for the last five years and now Jordyn Brazier is a main-event winner at Valvoline Raceway.

In what was a fitting result considering the horrific news during the week that threatens the long term future of the iconic Parramatta venue one of the families that has put their heart and soul into both its creation and it's current existence stood on top of the podium the very next feature race.

The fourth generation version of this iconic Speedway dynasty, Jordyn, after several close attempts, can finally lay claim to being an A-Main winner at "VR".

In his career so far Jordyn has been programmed to do as many laps as possible in as many places as possible including the famed Knoxville Raceway where his Dad Garry is still a household name.

In a sport where heartbreak can often go hand in hand with the horsepower there was nothing stopping the quietly spoken youngster from getting the victory this time that his Mum and Dad, his Pa and Nan and his sister have craved for so long.

The podium was filled with young men who have so much to gain from the future of Valvoline Raceway and Speedway in Sydney - all in their early twenties and all with the world at their feet.

Daniel Sayre and Michael Stewart are typical of the new breed of Sydney Sprintcar racing - smooth, clean cut and fast.

The podium result shows just how clearly the fight must go on to ensure the future of this sport in the city of Sydney.

The three blonde young guns stood on the podium last night for "Old School" Sprintcars night with a man in the middle who just wrote another chapter of winning history into an encyclopedia of speed for the world famous Brazier Family.