THE INSANE CEJN ONE LAP DOWN SPEEDCAR CHALLENGE 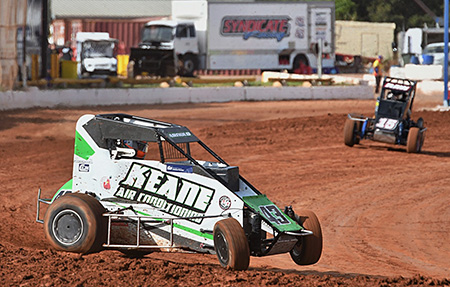 The NSW Speedcar Association has launched a new albeit old school initiative for this Saturday night’s CEJN Pty Ltd Spring Speedcar Spectacular that will see the A-Main pole sitter start one lap down.

This radical idea will give some serious spice to a Saturday night that skid that is also guaranteed to please with Nathan Smee back in the GRD #14 for the first time this season.

The concept for the OLDC is this:

Basically the highest qualifier given the Speedcars invert will be offered pole position a lap down.

“Yes that’s pretty much it, except I think we may offer to the winner of shootout first, then second, third and so on. If no one takes it from those six, just a normal handicap to rear.”

Matt Jackson eyes off a chance to score his fourth A-Main victory of the season after his strong win in last weekend’s Ultimate Speedway Challenge and feels confident now that he has solved the motor issues that plagued him early season.

Nathan Smee’s return though throws a complete wild card situation into the pack and although he’s had no track time the former Aussie and 50-lapper champion will come in as one of the definite pre-race favourites.

Troy Jenkins’ drive of old from the back of the bus to a sensational fourth place last weekend has his confidence soaring, Michael Stewart’s ripping podium finish after running double duty in the Sprintcar and having a flip in his earlier heat was sweet too.

Jamie Hall hopes to have the Mopar sensor issues sorted, Jay Waugh hopes to improve on his solid early season form,. DJ Raw is back after his crash last weekend, Robert Mackay has been racy this season and he hopes for a big result, Harley Smee is always a podium or main event win contender, Bob Jackson wants a better result than his recent disappointment and Glen Arnold is hoping his speed continues in the #43 Mopar also.

It all adds up to a spicy A-Main – now who will take the CEJN Pty Ltd “One lap down Challenge” in the Spring Speedcar Spectacular this Saturday night?