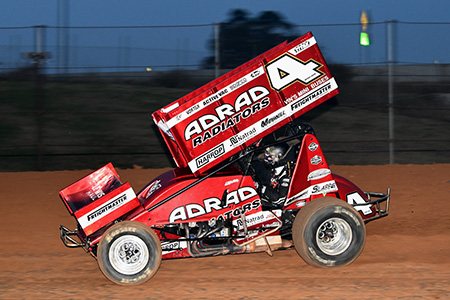 Henry made his VR debut in the Perrett Family Racing / ADRAD / Lewiston Haulage #4 and looked tidy in all appearances in the lead up to his victory in the 25-lap main event.

The 20 year old from Sacramento was a surprise entrant in tonight's field as he heads north to Brisbane after racing in Murray Bridge last Saturday night.

"It was a great chance to get our eye in for when we're back here on January 17 and 18 for the Ultimate Nationals," he smiled, "I think we can find a lot more speed in this car by then. I can't wait to get back here."

Henry led home established Sydney wheelers Daniel Sayre and James Thompson in second and third who were using the non points night as research and development ahead of this Saturday night's Ultimate Sydney Speedweek finale and George Tatnell Challenge.

Jason Bates wheeled his brand new #41 TGR Wingless Sprint to an all the way win in the A-Main despite the best efforts of Kyle Mock.

Mock had several real chances to challenge Bates but came up short in third place after getting loose above the cushion in turn one on the final lap as he challenged one last time.

His mistake allowed Marshall Blyton to slip into second place and Bates to evade his clutches as the St. Clair racer registered back to back wins having won at Murray Bridge Speedway last Saturday night.

Harrison Granger was a jubilant victor in the Junior Sedan main event in what was a spectacular affair for more than one reason.

Jackson Golding almost completed a fairytale story by nearly winning the main event in his first night with the new car that had been built for him by good mate Tyler Burnham and extended family and friends to surprise him when his own car had been destroyed in a factory fire in Orange.

The next event at Valvoline Raceway Parramatta is this Saturday night, January 11, 2020 and is the Grand Final of the Ultimate Sydney Speedweek incorporating the George Tatnell Challenge.